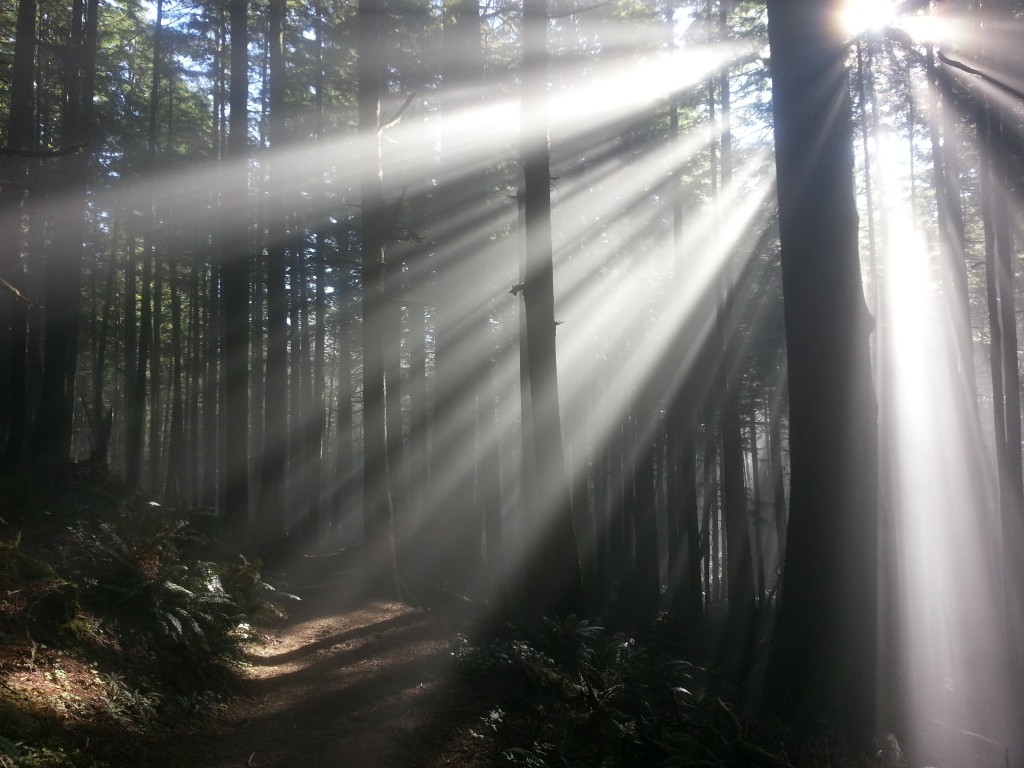 Truer words were never written. The air, the land and the ocean are home to all of the Earth’s inhabitants—and they are all citizens of our planet. They’re part of the enduring life cycle that has revolved–and evolved–since the beginning of time.

Some would say our planet and its creatures are resilient, adapting to warmer temperatures, rising sea levels, and other dramatic shifts–whether occurring instantly or over time–to individual ecosystems. Others would note the delicate balance of our planet’s systems, and how careless indulgences without regard for the environment can quickly throw the system off balance entirely. Rivers dry up. Habitats are destroyed. Species become endangered. Some disappear forever.

We’ve chosen to focus our work on the world’s oceans—more specifically, “what sinks.” No other organization focuses on this aspect of our world’s water supply in the same way that we do. It’s a two-pronged approach: protecting people and protecting the planet.

We cannot be so arrogant as to believe we can continue living as we do—continuing to pollute, to waste, to destroy. Our planet has endured much, but she is breakable as far as sustaining human life is concerned. She can go on without us. But we cannot go on without her. 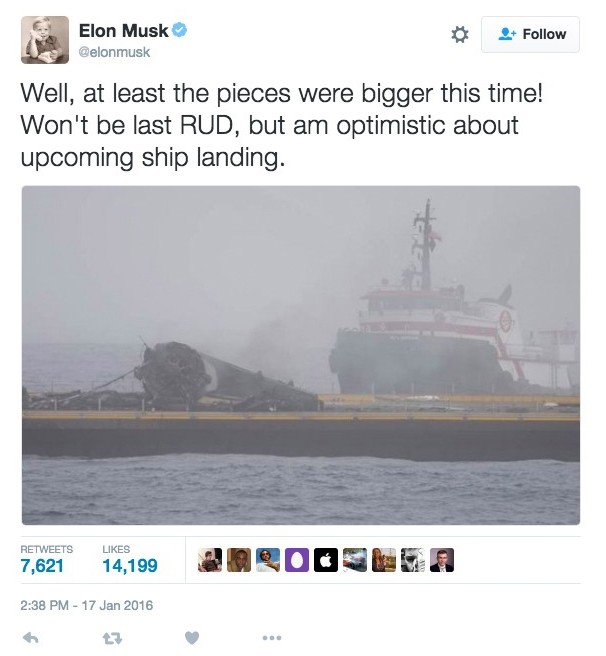 This is an actual tweet from Elon Musk’s Twitter account following one of several Falcon 9 crash landings. Each time one of these rockets hit the landing pad and toppled over, debris and toxins fell into the ocean and were allowed to stay there.

This would never be permitted to happen on land. Debris would be collected and disposed, and a proper cleanup of any environmental hazards would be mandated. People would demand it.

When it comes to the ocean, however, we seem to take an “out of sight, out of mind” approach. For some reason, companies, governments and individuals pretend it’s not a problem because the debris quickly vanishes to the depths of the sea, and is forgotten.

If Musk’s rockets were littering the landscape of the U.S., people would be outraged. They should be just as outraged, however, by the fact that they are littering the ocean floor. We, along with billions of people from around the world, eat from those oceans. This garbage does not belong in our waters.

In accordance with the Freedom of Information Act, Blue Ocean Environmental has issued formal requests of the U.S. Coast Guard, U.S. Air Force, National Oceanic and Atmospheric Association and NASA regarding the location and contents of the rocket debris that went into the ocean as a result of these landings. We expect a response within 20 days, as required by law. We will keep you posted as to what we learn from our inquiry.

This practice must be stopped. Out of sight is not out of mind.

In my work to promote and advance the clean oceans cause, I’m amazed by the visionaries who recognized our pollution problems decades ago—long before environmentalism was a major concern of our people or even our government.

The U.S. Environmental Protection agency wasn’t formed until 1970—six years after marine biologist, ecologist and author Rachel Carson died. Carson is credited by many for lighting the fire that launched the environmental movement of the 1960s, though she often endured ridicule and attack for the ideas and concepts she put forward.

While Carson was indeed a mind ahead of her time, she came along none too soon. Her work, which includes numerous books as well as legislative testimony, raised public consciousness about the environment, and the intricate and delicate balance that exists between our planet and the life that inhabits it. Perhaps her most important work, Silent Spring (1962), warned of the dangers of widespread pesticide use, eventually leading to the ban of the chemical DDT in the U.S. and other countries.

The even bigger message of Silent Spring is a prophecy that we are witnessing today as it comes to fruition: Carson claimed that unbridled abuse of the environment by humans would not go unanswered—that if humans destroy nature, nature will destroy humans. One need look no further than our 24-hour news cycle to find evidence of this prediction unfolding as Carson described. Her book sold more than two million copies.

Carson died of breast cancer in 1964. Her work, among that of others, helped lay the groundwork for formation of the U.S. Environmental Protection Agency and the Environmental Defense Fund. Some environmental groups also trace their purpose and their roots to Carson.

Another visionary whose big-picture ideas were ahead of his time used music to reach the masses. Forty-five years ago this month, in 1971, Marvin Gaye released his self-produced protest album, What’s Going On. The album includes the song Mercy, Mercy Me. Four and a half decades later, the lyrics are no less relevant than they were the first time they were uttered:

Oh, mercy, mercy me
Ah things ain’t what they used to be, no no
Where did all the blue skies go?
Poison is the wind that blows from the north and south and east
…
Oil wasted on the ocean and upon our seas
fish full of mercury
…
Radiation under ground and in the sky
Animals and birds who live nearby are dying
…
What about this overcrowded land
How much more abuse from man can she stand?

These are two very different examples of champions of the environment. What’s common between them is that they shared what they believed–and what they knew to be true–from their hearts. They worked (and continued to work) in spite of denigration and criticism. They did it before environmentalism was mainstream (much less “cool”), and in many cases, they went forward alone. They planted ideas that are our responsibility to share and to carry forward.

As these two could attest, one person CAN make a difference. What will you do to further the cause?

Earlier this year, I traveled to New Zealand and spent two weeks looking for potential sites for Blue Ocean Environmental’s ship recycling program. It’s an effort we’re piloting in Astoria, Oregon, and one that can be replicated in other cities in the U.S. and around the world, wherever there is access to water and a need for family-wage jobs.

While I was in New Zealand, I found the town of Westport, which is on the western coast of the South Island of the country. It’s a small community of about 4,000 people. Early inhabitants included Maori settlers (I had the honor and privilege of spending seven days with a Maori tribe while I was there). The first white settlers came in 1861 as gold miners, though the region eventually became famous for coal.

Mining of any kind is a dangerous business, even by today’s standards. Two of New Zealand’s deadliest mining disasters occurred a short distance from Westport. The Brunner Mine disaster killed 65 workers in 1896, and still claims the title of New Zealand’s worst mining disaster. And twenty-nine workers were killed as recently as 2010 in a Pike River Mine accident. Loss of life in small communities hits especially hard. And then come the job losses when operations are suspended or shut down completely.

I found an abandoned shipyard in Westport that could easily support a ship recycling facility as well as hundreds of jobs. With practices that support recycling of materials, prohibit discharge of fuels and chemicals into the water or land, and provide a safe work environment and family-wage jobs, it’s a solution that makes perfect sense.

There’s a section of our website that shows the horrible effects of “shipbreaking” (the haphazard dismantling of ships on the shoreline) to workers and the environment. This is a practice that must be stopped. Ship recycling is the right alternative, and we are fighting to make it the rule, rather than the exception.

I encourage you to learn more about what’s happening in places like Chittagong, Bangladesh and Alang, India, where some of the most egregious human and environmental offenses are taking place. Then consider what smarter, cleaner practices would mean for our oceans and for people who need better jobs than those paying $2 a day while subjecting them to harrowing and sometimes deadly conditions.

This is what is on our minds this Earth Day.

Massive die-offs of sea life are not normal occurrences. They point to something seriously wrong with our environment, and it’s time for everyone–not just scientists and environmentalists–to wake up, pay attention, and do something.

Blue Ocean Environmental issued a 4-Stage Threat Proclamation concerning the state of our oceans and the dire consequences for inaction, including famine and starvation for millions of humans. We are currently experiencing Stage 2 of the threat, evidenced by recent events you may have seen in the media:

There is no denying that irreparable damage to our oceans and sea life has already occurred, and continues to happen due to abnormal temperatures and other unusual environmental phenomena. This is nature’s way of issuing a stern wake-up call. Are you listening?

Be part of the solution

Blue Ocean Environmental promotes responsible progress with solutions that respect the environment. Learn more about what we’re doing and why it’s important, then sign up to stay informed and get involved. Are you going to be part of the solution?